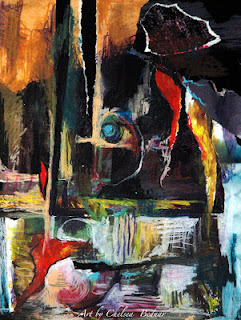 At the edge of the forest something stirred
and through the dark trees came
a figure cloaked and wrapped about
with a flash of lightening flames.

It muttered spells beneath its breath
and mists rose from the lake
where some poor maid had met her death
when bitten by a snake.

Rosamunda was her name
and beautiful was she,
but the poisoned bite had made her lame
and unable to flee

the cruel huntsman and his bow
who wanted his revenge
for vows she'd taken long ago
on the altar at Stonehenge.

She'd said that she would rather die
than ever be his bride,
so he let his angry arrows fly
to pierce her in her side...

The ancient crone, a witch, in truth
had spied the young girl bleed,
and taken by the fair maid's youth
swore to undo the deed.

" By fire and water, earth and air
you'll not meet your demise!
By all the powers good and fair,
I bid thee maid, arise!"

And slowly from her watery grave
Rosamunda stepped at last
rejoicing as she realised
her troubles all were past,

for the crone had sent the huntsman forth
with promise of reward
if he remained far from this land, OR
his head would meet death's sword!

Today's NaPoRiMo was inspired by IGWRT's challenge. With thanks to Chelsea and her Mum.