In a comment on my last post, Dr FTSE asked me to write a little something about those annoying people who plague our lives, either by trying to sell us computer or internet deals- or simply for the chance of hacking our screens. 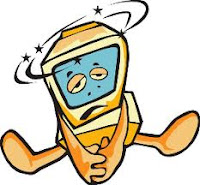 "There's something wrong with your computer,
just follow my advice!"

Thinks:- (But if you do, I'l nobble you
just like a ton of ice
that's jettisoned from out a plane -
It won't be very nice!
I'll infect you with a virus before the day is through,
if you heed my wicked words, as some poor suckers do.)

I pretend to be an expert, an IT brainy geek -
the kind that uses telephones to feed you double-speak -
until, too late, your screen goes blank
and I'll know that I'm the one to thank, ha HA! 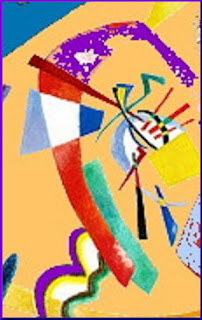 An artist called Spike,
when his muse strikes,
rushes for brushes and palette.
He mixes his paint
with a fervour that's quaint -
while he dances a colourful ballette(!)

In front of his easel
he strides up and down
while genius burns.
Though he looks like a clown
all his pictures are worth a small fortune!

The critics agree
he's an anomaly
but his fortune continues to burgeon.
He sings as he works
and despite all his quirks,
his hands have the skill of a surgeon,
as golden ratio sections defy all detection
with lines both unusual and free.

But the price that he'll charge
would need to be halved
to appeal to a pauper like me!

Written for The Mag, where Tess gave us a picture, Red Spot II, Wallisy Kandinsky for inspiration this week, from which I have chosen a detail to adapt for this post.
Posted by Jinksy at Sunday, January 29, 2012 34 comments:

Mary, over at IGWRT, wants a poem from us which includes conversation. After my previous post the subject of telephones remained uppermost in my mind. I still get calls from people wanting the services of a local gardener, whose telephone number differs from mine by only one digit, and many's the time I've had conversations similar to the little example I've written today:-

"Is that the man who cuts my lawn?
Oh, dear the money's nearly gorn..."