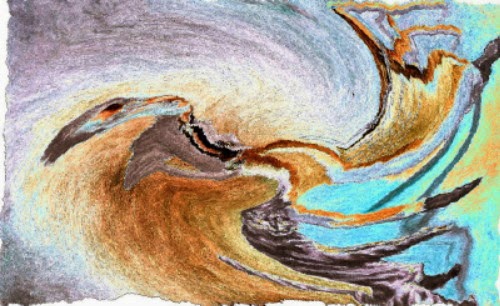 Terri Daktill was a bird
without much wing or feather.
But in his mind he was quite sure
he was the best bird ever.

He strutted across desert plains
defying wind and weather.
But now his bones are fossilised
until the twelfth of never.

For he fell into a weed strewn pond
which had a muddy bottom,
and over time this mud ensured
he'd never be forgotten.

Terri is secure at last
thanks to primordial slime;
an image from our ancient past
he's a relic fused in time.

Earlier in the week I watched a great BBC program about a world heritage site in Messel, Germany, which has produced a wealth of fantastic fossils. I am indebted to that for my inspiration, as well as Tess and her Mag picture by Balthus, from which I produced this image.
Posted by Jinksy at Sunday, April 13, 2014