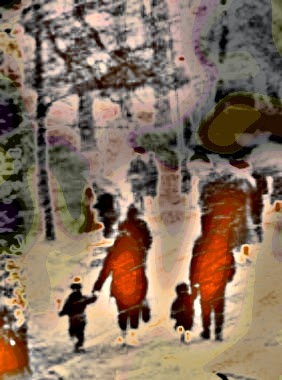 Beyond the plantation, a mysterious glow lit the horizon. It seemed to creep closer, until it had outlined both young and old, and its energy drew them inexorably towards the source.

Indistinct bell-tones echoed through the crisp air, strands of notes swirling like garlands, to drape tree branches and shoulders alike.

There was a feeling of calm, and a great sense of homecoming as the people quickened their steps, eager to the reach their destination and begin a new life.

Written for The Mag  Thanks to Tess for the prompt, and to George F. Mobley, from whose photo 'Finland 1968' I chose this detail to play with.
Posted by Jinksy at Sunday, April 20, 2014