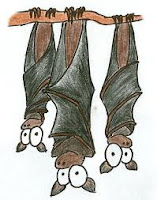 After a frustrating morning when email problems caused hassles I would rather forget, I happened to see that Theme Thursday had the word 'Confusion' for this week, to set everybody thinking - me, included. But that was fatal, for as you will see, my thoughts were what became confused, and this was the result. Be thankful if yours never treat you in the same fashion...

Bats in the belfry, perhaps...

If down was up and up was down,
how would we all get around?
Would we tiptoe on our ears,
use our feet to change the gears
of daily living?

Hands would be like stabilizers,
soles would be the supervisors
over paths that lay ahead
of our upside-downside heads.
Luscious locks would sweep the floor,
but baldies crowns might cry "No more!
I cannot stand this rough terrain!
Put me right side up again!"

You see, my thoughts are in confusion
when lunacy makes an intrusion
to my any-which-way head.
I think I should have stayed in bed -
for horizontal gives the lie
to up or down.

And to cause more of the same, Mrsupole's  linky list will not appear until later this week - but here I am now. How far will the confusion spread in the interim?
And  today, Friday, I've just re-discovered a poem I wrote two years ago on this same subject, so thought I'd add it here as a late edition extra.


Confused? Let me help you!

It doesn't take much to make confusion reign,
for my brain has a habit of leaping
much faster to an end result
than the brain of the one who is speaking.

Now, sometimes that's me- more often another-
as an answer does tend to evolve
in less than a twinkling, as often as not,
to any old question we're trying to solve.

Then I see by the mystified look on their face
that my pal's in the dark, not the dawn,
whilst I have already completed the race
and am standing about with a yawn

till they reach a conclusion that's similar to mine,
though I've already got there in half of the time!